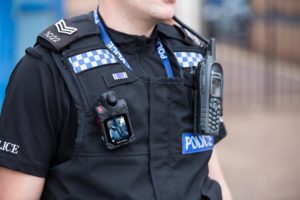 A body-cam can help defendants in criminal cases.

Criminal cases in the era of the body-cam

Police forces across England and Wales are preparing for a rollout of ‘Body-worn Cameras’. The government has announced that prison officers will also have this new technology. Evidence in criminal cases will in future often include footage from body-cams.

What are Body-worn Cameras (body-cams)?

Body-cams are small recording devices, very similar to a GoPro, which allow for constant audio and video recording in an unobtrusive manner.

The evidence from these cameras can be used to support or challenge a prosecution, and some argue that with officers and others aware that their actions could be caught on camera, it will result in a positive effect on behaviour.

Is behaviour calmed when a camera is present?

We behave better when being watched, for example, we are less likely to speed past a roadside camera.

In 2011, researchers at Newcastle University posted pictures of a pair of male eyes and the caption, “Cycle Thieves: We Are Watching You.” Bike thefts decreased by 62 percent in those locations — and not elsewhere.

A study in Rialto California (USA) in 2012 appeared to show dramatic changes in police behaviour. Complaints against police officers were down 90% compared to the previous year. Critics, however, have been sceptical of this study, in part because only 54 officers participated.

Now, police forces in England and Wales are following suit.

The Rialto findings seemed to accord with common sense, but a new 18-month study of more than 2,000 police officers in Washington (USA), published on 20th October has disclosed ‘almost no effect’ on police officer behaviour.

Are BWCs a good or bad thing for defendants?

The answer depends on whether the footage supports the defendants’ version of events or undermines the police officers.  The only comparable change in the collection of evidence was the mandatory admission of solicitors to interview rooms and the advent of tape recorders subsequent to PACE. This was later followed by video recording not only of some interviews but of whole areas of the custody suite. It was a very long time ago but our experience was that overnight clients were no longer having words admitting the offence put into their mouth. In the parlance of the time being “verballed” or making statements under caution admitting offences.

Goodbye to the opportunistic arrest?

It will certainly be harder for officers to make opportunistic arrests for non-existent offences of assault police, or obstruction as they will know that the body-cam will show what happened. It is our experience that such arrests often arise from a non-productive stop and search of both pedestrians and cars. The police officers are frustrated at not getting a result. The suspect is angry at  an infringement of  their right to go about their lawful business without interference.

From a good practice point of view, it will become even more important that defence solicitors attending at the police station request that all body-cam footage is preserved. The request should be  entered on the custody record or an independent timed note made.  This may avoid footage unhelpful to the police going missing.

Other  benefits of BWCs are:

On balance our view is that any concern at the introduction of body-cams is outweighed by their ability to give an objective account of events. The cameras will act as a brake on unprofessional, or unlawful police behaviour. At the same time they will defuse situations which might otherwise get out of hand. This is because an aggrieved suspect is more likely to behave lawfully in front of a camera. Anyone wrongly prosecuted for criminal cases of obstruct or assault police will welcome  an objective view of the evidence.

What is clear to us is that we will  see the evidential worth of cameras in an increasing number of criminal cases. Such evidence must be analysed carefully, so as not to fall into the trap of believing that ‘the camera never lies’. Context is everything. We often find that video evidence can be distorted or selective. It may in some cases be crucial to obtain all available footage, for example from other officers not involved in the arrest or patrol car dash-cams. This will give a more accurate picture of events.

As with all technology — the machines themselves are neutral. They are  neither good nor bad, it is how they are used that really matters. An alert solicitor pursuing all avenues of investigation in  criminal cases will in future always ask for the body-cam footage.

Contact Keith Hollywood on 020 8986 8336 if you have a criminal case involving body cameras or use the contact form below.