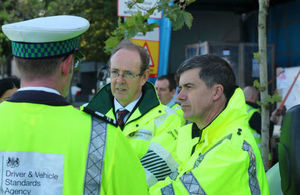 Fly tipping waste in fields and empty commercial properties is becoming a real problem. If the land is contaminated or insurance rises as a result it becomes very costly. Dumped waste is also a major fire risk. So its not surprising that we expect a crack down.

What is being done?

The Environment Agency is contacting property and landowners, agents, trade associations and local authorities. They warn them of the serious dangers and costs created by fly tipping. They are advising landowners how to better protect themselves. There have been programmes on TV such as “Filthy Rotten Scoundrels”  which raise the profile of the problem. This will lead to more criminal investigations and prosecutions.

“Waste criminals operate throughout the country, offering to remove waste cheaply and then dumping it in fields or empty warehouses. They tend to move to new areas as enforcement agencies become wise to their activities. We know it’s only a matter of time before they target us again so we’re sending out a strong message: Waste criminals are not welcome here and we’re doing everything in our power to deter and catch them.

Change on the roads

Illegal transportation of waste will become more difficult. This is because the Environment Agency and Driver and Vehicle Standards Agency (DVSA) have agreed to carry out joint operations to cut the movement of illegal waste.

They will use their combined enforcement powers to tackle fly tipping and the movement of waste to illegal and badly run sites.

In summary everyone has a duty of care to handle their waste properly. Section 34 of The Environmental Protection Act 1990 http://www.legislation.gov.uk/ukpga/1990/43/section/34 puts this duty on anyone concerned with handling waste. This Duty extends to anyone who produces, imports, carries, keeps, treats or disposes of controlled waste.

If you are facing an investigation or prosecution, we are here to defend you. As stated above sentences  for fly tipping and other offences can be high, sometimes reaching the hundreds of thousands of pounds, and in some cases resulting in imprisonment. For example, last week United Utilities was fined £666,000, with costs of £32,000 at Manchester Crown Court. They had admitted pollution offences involving raw sewage.

You cannot afford to leave your defence to chance, contact us on 02089868336 or by e mail to info@mosslaw.co.uk to arrange an appointment.