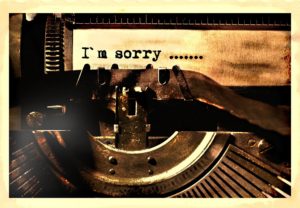 Sorry, seems to be the hardest word…

But in criminal law, sometimes a simple act of contrition, genuinely felt and communicated, can alter a case outcome significantly. A timely admission and expression of sorrow can make the difference between a formal resolution such as caution or charge, and persuade the police to consider an out of court community resolution.

Restorative justice is a popular out of court disposal and preferable to almost all other outcomes when guilt is not in doubt. Research in criminal law shows that the process has benefits for both victim and offender. Other out of court disposals such as driver awareness courses can also have an impact on an offender willing to address their behaviour; few leave undisturbed by the graphic images of a child hit by a speeding vehicle.

In court, it can sway a bench in some cases to impose a more lenient punishment, so we always work with clients to ensure mitigation is advanced adequately at all stages. Of course, sorry in itself might not mean much, what are you sorry for, is it being caught, finding yourself before a court, or is it more than that – does it amount to genuine remorse?

This is an important question in sentencing terms as ‘genuine remorse’ is a mitigating factor in almost all sentencing guidelines and can make a substantial difference to the outcome. The Oxford English Dictionary defines remorse as being: ‘A feeling of compunction, or of deep regret and repentance for a sin or wrong committed.’ A court will, however, be looking only for genuine remorse, and it is far from being a scientific exercise.

“This factor appears in all Sentencing Council guidelines and is one that Judges are adept at assessing. Judges sitting in court on a daily basis are alive to the ease with which ‘sorry’ can be said but not meant. Evidence obtained during the course of interviews with judges (during the consultation process) confirmed the way in which judges carry out this assessment; often the judges used phrases in conversation with us such as ‘genuinely remorseful’, ‘genuine remorse’ and ‘true remorse’. This confirms the Council’s view that the consideration of remorse is nuanced, and that all the circumstances of the case will be considered by the sentencing in deciding whether any expressed remorse is in fact genuine.”

In a recent lecture, a High Court Judge offered up these examples to illustrate genuine remorse in a crimainl law case:

How can we assist?

It is our job when representing clients in criminal law cases to ensure that the best case is put forward, not just the usual mitigation offered by a guilty plea, but other aspects of the defendant’s character that shine a light on their true self. People make mistakes, sometimes serious ones, but rarely does that alone define the real person. We believe that carefully presented mitigation makes a real difference.

For assistance with any criminal matter, please contact Jamie Ritchie on 020 8986 8336 or use the contact form below.